Need to ask us something?

Rugby Success for Chippenham based engineer. 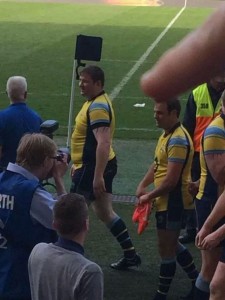 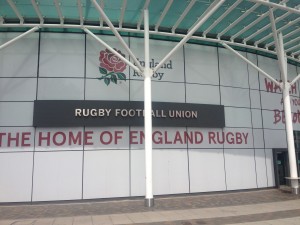 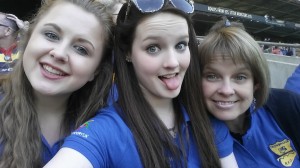 On Sunday May 4th 2014 some of the John Williams Heating Services team, based in Chippenham, Wiltshire made the journey by train to Twickenham Rugby ground to watch Trowbridge Rugby take on Leek in the RFU intermediate cup. John Williams Heating services engineer Karl Parry was key player in the match and went onto score Trowbridges’ first try. TROWBRIDGE clinched the RFU Intermediate Cup with a 22-19 success over Staffordshire side Leek in a pulsating final at Twickenham. Steve Ojomoh’s side scored tries through replacement Karl Parry, full-back Jackson szabo and – in what he said was his final match as a player – prop Sean Jones, fly-half Lloyd Davis adding two conversions and a penalty. The Wiltshire men had to withstand a ferocious late onslaught from Leek, who battered away at the try line for virtually the whole of the last five minutes. But Trowbridge’s defence, the hallmark of a season that has also seen them clinch promotion from Southern Counties South, came to the fore again before referee Luke Haskins’ final whistle started riotous celebrations among the 2000 or so supporters who had travelled up from Wiltshire.The epic match was in the balance until the final moments, an appropriate ending to a contest which was even throughout.Leek, prompted by fly-half and skipper Gary McDermott, did the majority of the early pressing but found their way barred by the Trowbridge defence which never gave an inch all afternoon.After 20 minutes or so of stalemate, Trowbridge got on the board as Davis knocked over a penalty after Leek had botched one of their own lineouts.As became the theme of the match though, Leek roared straight back and scored the opening try of the game.A good attack earned a penalty – then an extra ten yards for some Trowbridge backchat. The Staffordshire side took advantage as they won a clean lineout and hooker Luke Granger ploughed over from close range.McDermott missed the conversion and, almost immediately, Trowbridge regained the initiative.Both full-back Szabo and wing James Davies made breaks and the forwards rumbled the attack on before replacement Parry burrowed his way over from close range. Davis added the extras.Leek could have got on level terms when Thomas Sims dropped the ball with the line beckoning before wing James Floyd was scragged by Szabo when in a threatening position.But Trowbridge remained in front at half time and, ten minutes into the second half, they moved further ahead with a stunning score.Szabo fielded a loose ball in midfield and set off on a meandering run across the field, beating several opponents. Skirting around the outside, he then broke the final tackle before charging over the line for a stunning 60 metre individual score.Davis was unable to add the extras and back came Leek once again as the Trowbridge defence came under the most severe pressure before McDermott spotted a gap in midfield and charged over from close range, before adding the conversion.The tension only ratcheted up further heading into the final 20 minutes, although Trowbridge were handed a boost when Leek lock Edward Harrison was sin-binned for a tap tackle on Jones.Trowbridge took advantage as, after a series of drives close to the line, Jones barged his way over near the posts for a fairytale try, Davis adding the two points.With a ten-point lead, Trowbridge looked in command but Leek simply refused to lie down, McDermott dropping a scoring pass with the line gaping.Eventually though, Trowbridge ran out of defenders as Floyd scampered behind the posts, the McDermott conversion making it a three-point game again.The final five minutes brought almost unbearable scenes of tension as Leek hammered away at the Trowbridge line, courtesy of a couple of reset scrummages.Trowbridge though, simply refused to wilt and when Leek dropped the ball three meters out, referee Haskins’ whistle brought scenes of unbridled joy. 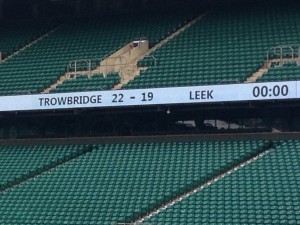